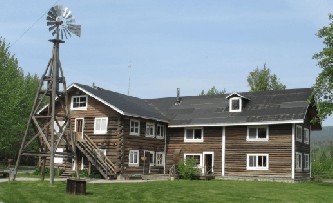 NOTICE: Big Delta State Historical Park and Rika's Roadhouse (cafe and dump station) will be closed for 2022 until further notice.

One of the greatest aspects of coming to Alaska is learning about its tremendous history. At Big Delta State Historical Park, you get to take a walk through the past. This site was an important crossroad for travelers, traders, and the military during the early days of the 20th century.

Rika's Roadhouse is the centerpiece of the park. The house served travelers on the historic Valdez-to-Fairbanks Trail from 1913 to 1947. John Hajdukovich had the north-south section of this log structure built in 1913. The Valdez-to-Fairbanks Trail was being improved at this time and the roadhouse was a center of activity for gold stampeders, local hunters, traders, and freighters.

In 1917 Hajdukovich hired a Swedish immigrant named Rika Wallen to operate the roadhouse which prospered under her management. In 1923 she bought it from Hajdukovich for "$10.00 and other considerations," presumably in lieu of wages. The roadhouse was named "Rika's" following local custom. Rika operated the roadhouse through the 1940's, although in later years guests were by invitation only.

As you walk into present-day Rika's Roadhouse you will see that part of the original kerosene crate floor has been restored. The bedroom and kitchen are furnished in the style of the 1920's and 1930's. Furnishings were donated by local residents under the auspices of the Delta Historical Society.

Also located in the park is a Washington Alaska Military Cable and Telegraph System (WAMCATS) station. In 1900 it took a year to send a message from interior Alaska to Washington D.C. and receive an answer. To speed communications, the US Signal Corps, a branch of the Army, built the WAMCATS. After part of the original line burned, the line was moved to parallel the new Valdez-Fairbanks Trail. 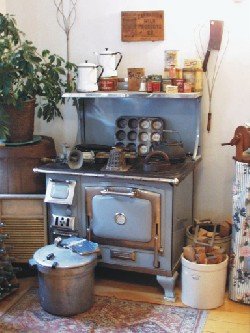 This WAMCATS station, called McCarty Station, was established in 1907 to maintain the telegraph. Several log cabins housed the telegraph office, a dispatcher, two repairmen and their supplies. The telegraph was replaced in 1926 with a 50-watt radio, which was used until 1935 when the site was given to the Alaska Road Commission. During World War II, the Army reclaimed the property for a soldier encampment.

The Delta Historical Society maintains a museum in a sod-roofed cabin at Big Delta State Historical Park. The artifacts in the museum, dating from 1900 to 1950, were collected from local people. Artifacts include blacksmith tools, horse tack, dog harnesses and sleds, many household items and much more. There is also a display of historic photographs.

Rika's Roadhouse Café and Gift Shoppe Will be closed for all of 2022, but the rest of the park will be open for visitors.

Big Delta State Historical Park is a ten-acre park with 23 RV camping sites in the parking lot development. Facilities include picnic area, toilets, water and a dump station. The park is located 8 miles north of Delta Junction at Mile 274.5 of the Richardson Highway.