The Story of Totem Bight

With the growth of non-Native settlements in Southeast Alaska in the early 1900's, and the decline of a barter economy, Natives moved to communities where work was available. The villages and totem poles they left behind were soon overgrown by forests and eroded by weather. In 1938 the U.S. Forest Service began a program aimed at salvaging and reconstructing these large cedar monuments. By using Civilian Conservation Corps (CCC) funds to hire skilled carvers from among the older Natives, two things took place: young artisans learned the art of carving totem poles, and totems which had been left to rot in the woods were either repaired or duplicated. Alaskan architect Linn Forrest supervised construction of the model Native village for this site, then called Mud Bight. The fragments of old poles were laid beside freshly cut cedar logs, and every attempt was made to copy them traditionally. Tools for carving were hand-made, modeled on the older tools used before coming of Europeans. Samples of Native paints were created from natural substances such as clam shells, lichen, graphite, copper pebbles, and salmon eggs; natural colors were then duplicated with modern paints.

By the time World War II slowed down the CCC project, the community house and 15 poles were in place. The name of the site was then changed to Totem Bight. At statehood, in 1959, title to the land passed from the federal government to the State of Alaska, and the site was added to the National Register of Historic Places in 1970. At that time it came under the management of the State's Department of Natural Resources for continuing historic preservation treatment by the Division of Parks and Outdoor Recreation.

A community house or clanhouse of this size could have housed 30 to 50 people. Although it is doubtful a clanhouse existed on this site (originally a fish camp), this design is representative of the type in many Indian villages built in the early 19th century.

Inside is one large room with a central fireplace surrounded by a planked platform. The walls and floors were hand-adzed to smooth the surface and remove splinters. The dwelling served as living quarters for several families of a particular lineage. Each was allotted its own space but shared a common fire. Housewares, treasured items, and blankets were stored under the removable floor boards, and food items were hung from the beams and rafters. The members belonging to the house would be headed by a house chief of the same lineage. 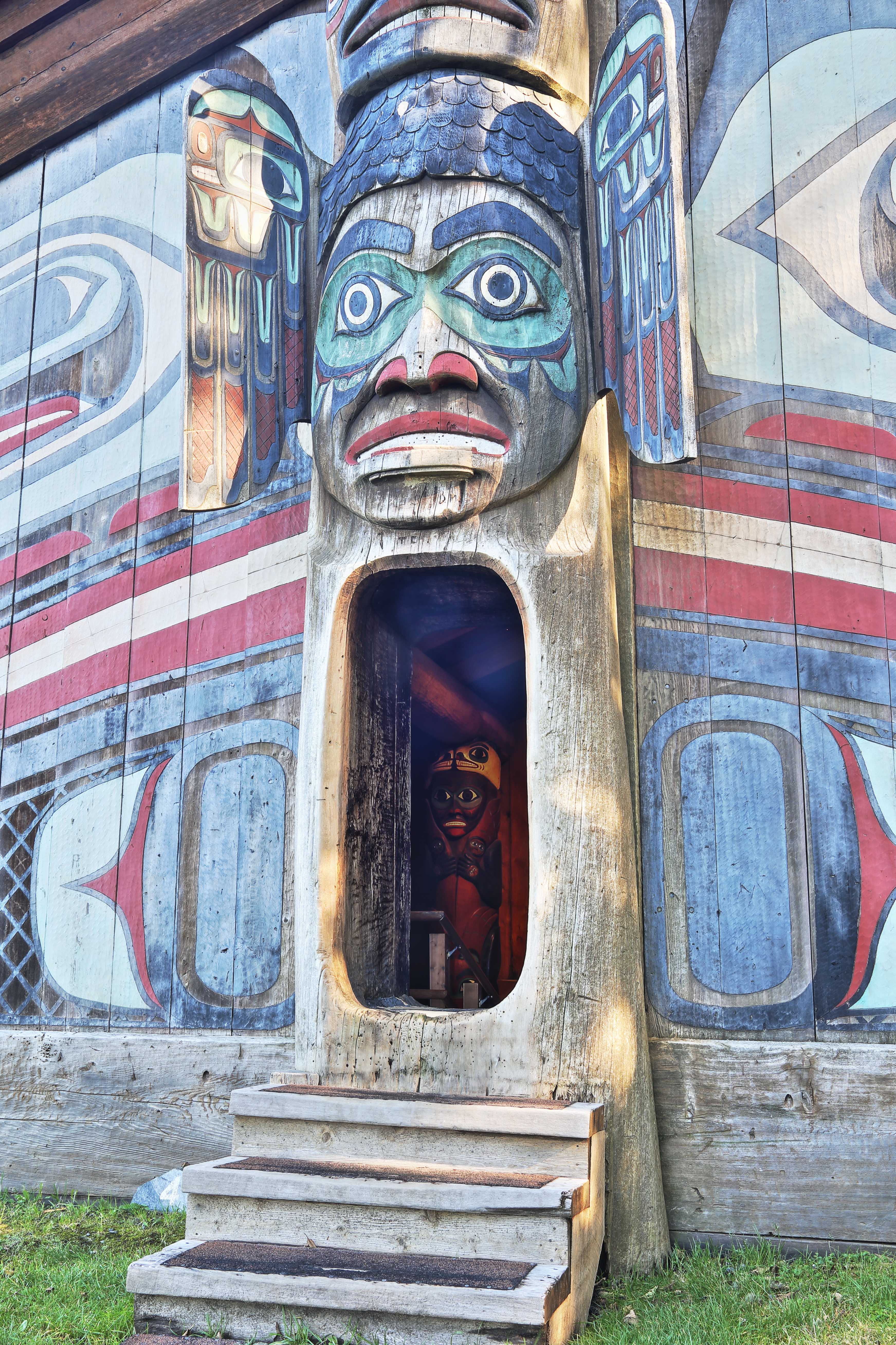 The carved house posts supporting the beams inside symbolize the exploits of Duk-toothl. He is a man of Raven phratry wearing a weasel skin hat who showed his strength by tearing a sea lion in two. The painting on the house front was designed by Charles Brown. It is a stylized Raven with each eye elaborated into a face. Designs on the house fronts were rare, and occurred only in cases of great wealth.

On the front corner posts sits a man in a spruce root hat with the crest design on his face and cane in hand. He is ready for a dance or potlatch.

In Alaska, one is surrounded with natural bounty. Eagles and ravens soar above, perch in treetops, and swoop to the waters below. Whales, otters and sea lions inhabit the bays and inlets. Bears, deer and wolves live in forests of tall cedar, spruce and hemlock. Berries and edible greens cover the forest floor, while salmon and halibut swim in the waters.

Totems, skillfully carved by artists in Southeast Alaska, reflect these resources with symbolic characters carved on totem poles and on the community house at Totem Bight. This guide will introduce some of the characters carved on the poles. Despite early misunderstanding by European missionaries, totem poles were not worshipped; they were silent storytellers. There was no written language.

A Tlingit myth tells that the people were inspired to carve totem poles after finding a carved log washed up on the beach. You may wish to look more carefully at the large logs lining the shores today. The Haida tell of a master carver who created a house front and several poles overnight and then taught the villagers how to carve.

The brief narratives in these pages describe the individual poles as well as records allow. Stories and events associated with the totem poles were sometimes interpreted differently by different clans and communities. To understand totem poles, a deeper, more through knowledge of Native people and their history is necessary.

The Tlingit and Haida Indians are each divided into two matrilineal groups called moieties or phratries. These divisions are represented by the Raven and Eagle (wolves) in totem art. Within these moieties are smaller clans, whose members are more closely related. These clans are further subdivided into lineages or house groups, which is the fundamental social unit, tracing the matrilineal descent to a common ancestor.

Early Tlingit and Haida poles are often distinguishable by their layout. Haida figures interconnect and overlap more than Tlingit figures, which are isolated from each other and present a more rounded and sculptured appearance. 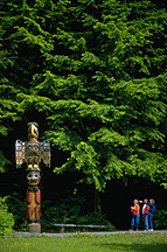 While Totem Bight is generally considered Tlingit country, you will find both Tlingit and Haida myths and legends enshrined here.

The rich resources of this area enabled the people who lived here to have the leisure time necessary to develop their art. The unique art of the Northwest people made use of various forms and techniques to produce the images around you. The art style is usually based on the form line which establishes the principal shapes and design units within a piece of art. The appearance of a third dimension is made where the two dimensional form line design is wrapped around a half cylinder. The form line proportions run from thick to thin in a curvilinear pattern and connect and outline the basic shapes used throughout this style of art.

The ovoid or rounded rectangle is the most characteristic shape used and may delineate a variety of things including the head of a human or creature, eye sockets, or major joints. They may help form the shape of a wing, tail, fluke, or fin. Small ovoids may contain faces or indicate eyes, ears, noses, the blow hole for a whale, or simply fill empty spaces and corners. S-forms and U-forms are used for connecting, filling and contouring.

Color is one of the great unifying characteristics of the art. Colors were limited to a few natural pigments made from salmon eggs, hematite, and other minerals, and European trade did little to change the choice of colors. Black remains the primary color; red is for secondary elements; and blue-green is for tertiary highlighting.