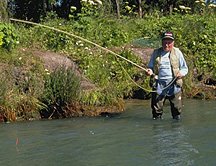 The Kenai River Special Management Area (KRSMA) consists of more than 105 linear miles of rivers and lakes, including Kenai Lake, Skilak Lake, and the Kenai River from river mile 82 downstream to four miles above the river's mouth on Cook Inlet. Adjacent to these waters are fifteen state park sub-units and land owned by cities, the borough and the federal government, as well as private and native lands.

The popularity of the Kenai River, one of the most heavily used fresh-water fisheries in Alaska, puts a strain on its resources. In response to increasing threats to the river system's health, the legislature established the Kenai River Special Management Area in 1984 as a unit of the state park system.

A comprehensive management plan for the area, developed by agencies and a public advisory board, guides the cooperative efforts of the land managers. The plan's goal is to protect the natural resources and fish and wildlife habitat, manage the river's recreational and commercial uses, and provided public facilities.

The Kenai River Special Management Area Advisory Board meets the second Thursday of each month from September to May. The meetings are held at the Donald R. Gilman River Center, 514 Funny River Road, Soldotna and begin at 5:30 p.m. For copies of the latest agenda and minutes please contact the Kenai Area Office at 907-714-2470.

Map of the River