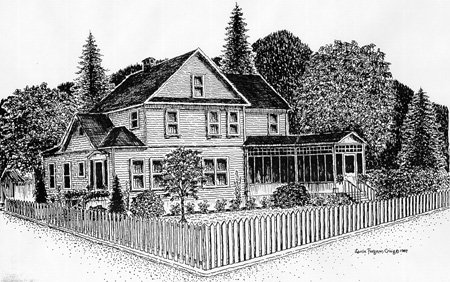 House of Wickersham - Home of Alaska's Pioneer Judge, James Wickersham Built in 1898 and listed on the National Register of Historic Places

House of Wickersham, Home of Alaska's Pioneer Judge, James Wickersham. Built in 1898 and listed on the National Register of Historic Places James Wickersham was a statesman, author, historian and scholar. Evangeline Atwood, author of Frontier Politics, had this to say about Judge Wickersham.

"No other man has made as deep and varied imprints on Alaska's heritage, whether it be in politics, government, commerce, literature, history or philosophy. A federal judge, member of Congress, attorney and explorer, present-day Alaska is deeply in debt to him."

Step back in time thorough the doors of the House of Wickersham, the first large Victorian home built on "Chicken Ridge", the "Nob Hill" of Juneau, Alaska. Enjoy the wonderful view and learn about some of the history of Alaska's territorial days as seen through the life of the man responsible for "Home Rule", the Alaska Railroad, the University of Alaska and Denali National Park (formerly Mount McKinley National Park).