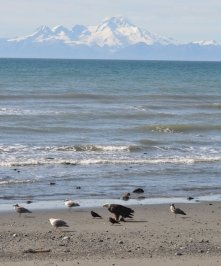 The first written descriptions of the land and people of the Kenai Peninsula are found in the 1778 journals from the British sponsored expedition of Captain James Cook. According to legend, Anchor Point got its name when Captain Cook lost an anchor near the mouth of the river.

Homesteaders began to settle in the Anchor River area in the early 1900's. They came from Homer, to the South, and Kenai and Ninilchik, to the North, and survived by hunting, fishing, and farming. They were a hardy lot and many of them and their descendants still live in the area.

Wildlife abounds around the Anchor River, with moose, beaver, mink, bald eagles, a variety of ducks along the river, harbor seals, sea otters, and beluga whales near shore in the Cook Inlet.

Anchor Point, where Anchor River State Recreation Area is located, is the most westerly point on the U.S. Highway System.