Parks Home / Be Safe Out There / Bear Safety

Nothing will guarantee your safety in bear country, but knowledge of bears and proper behavior greatly reduce your risk. For years people have believed that the one thing predictable about bear behavior is that it's unpredictable. The Alaska Department of Fish and Game biologists disagree. "Bears have reasons for doing things. It's only from our lack of understanding that their behavior seems unpredictable," says John Hechtel, a biologist with the Alaska Department of Fish and Game. He has 18 years' experience studying bear and human encounters.

Hechtel's job has placed him in potentially dangerous situations numerous times but he doesn't tell gruesome stories of being attacked, mauled, swatted, or stomped. Because of his understanding of bear behavior, Hechtel is able to use simple, respectful tactics and avoid dangerous encounters.

People who have many years' experience dealing with bears often have few, if any, life-threatening encounters to report. One example is Sandy Jamieson, an Alaskan bear guide for 30 years. He has guided hunters in to some of the most remote and heavily populated bear areas in Alaska and has encountered these animals more times than he can remember. Yet, in all of his experiences, he was forced to kill only one bear in defense of life and property. 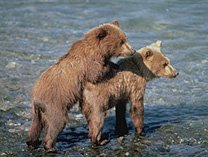 Hechtel claims that most confrontations between bears and humans can be avoided when people have a firm understanding of bear behavior and reasons for bear-human conflicts and show the bears respect. Unfortunately, he sees people behave inappropriately with these animals far too frequently. "I've seen people do stupid things to bears," Hechtel says. "I've seen people throw rocks at a grazing bear from 2 feet away just to get a better picture." Hechtel emphasizes that 95 percent of the time, people are responsible for determining whether the outcome of a bear encounter will be good or bad.

Most bears tend to be wary of humans and often will do anything to avoid them, Hechtel explains. Hechtel describes the few exceptions as the "food-conditioned" bear. A bear that has had previous contact with people and was rewarded with food or trash is considered a food-conditioned bear. The result is bad for the bear and for people. "A fed bear is a dead bear," Hechtel says. He explains how ninety-five percent of food-conditioned bears will eventually become nuisances and have to be killed.

Dick Shideler, also a biologist with the Department of Fish and Game in Fairbanks, says that once a bear associates people with food, it becomes a potential threat to all people in any future encounters. Such food conditioning is entirely preventable, however. Shideler believes that by modifying camping practices and by using proper food storage and trash disposal, people can eliminate ninety percent of the risk of wilderness bear confrontations.

Knowledge of bear behavior also helps prepare a person in the event of a confrontation. Don't panic if you see a bear and the bear eyes you intently. The animal is just surveying the situation, trying to identify what sort of creature it has encountered, and whether it might be in danger. Once the bear realizes it has happened upon a person, the bear usually moves off to more important things - the daily business of being a bear.

You can avoid them, or make your encounter a safe one, by following these safety tips. 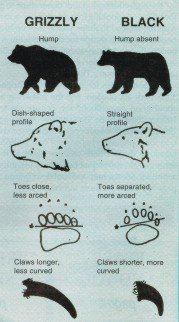 Always be "bear aware". At trailheads look for posted signs about recent bear activity. Watch ahead for bears or for tracks. Don't surprise bears. Make plenty of noise when traveling. Hiking in groups is safer than hiking alone.

Dogs can be trouble in bear country. Their curiosity has brought back bears to their owners more than once. It is best to leave your dog at home or keep it on a leash.

Please help prevent trouble for those who will follow you!

Never leave food out when not in use. Store food in your vehicle or a bear-proof locker.

Use bear-proof garbage cans or dumpster for your garbage.

Choose your campsite carefully. Do not camp near a trail, salmon stream, animal carcass, garbage, or any backcountry metal fire pit (others may have left food odors). Do camp in a tent in an open quiet area where you can see and hear nearby wildlife and where they can see and hear you.

Cook at least 100 feet away from camp, downwind. Do not cook near your camp, cook smelly foods, sleep in clothes with food odors, or bring any food or lotions into your tent. Store food, pots, lotions, clothes with food odors, and trash away from camp. If there are trees, cache your food out of a bear's reach (see below). If there are no trees, hang food off of a rock face or a bridge, or store it out of a bear's sight off the trail and downwind of camp.

Pack out all trash. Do not bury garbage, bears have very keen noses and can find buried garbage. Use a tent. Do not sleep in the open.

Food Cache - All you need is 100 feet of light line, a small weight to attach to the end of it (a plastic bag with a rock in it works fine), and food bags that you can tie to the line. You'll never have to climb a tree again!

Statistics show the best ways to react to bears when you see them:

If you see a bear that is far away or doesn't see you turn around and go back, or circle far around. Don't disturb it.

If you see a bear that is close or it does see you STAY CALM. Attacks are rare. Bears may approach or stand on their hind legs to get a better look at you. These are curious, not aggressive, bears. BE HUMAN. Stand tall, wave your arms, and speak in a loud and low voice. DO NOT RUN! Stand your ground or back away slowly and diagonally. If the bear follows, STOP.

If a bear is charging almost all charges are "bluff charges". DO NOT RUN! Olympic sprinters cannot outrun a bear and running may trigger an instinctive reaction to "chase". Do not try to climb a tree unless it is literally right next to you and you can quickly get at least 30 feet up. STAND YOUR GROUND. Wave your arms and speak in a loud low voice. Many times charging bears have come within a few feet of a person and then veered off at the last second.

If a bear approaches your campsite aggressively chase it away. Make noise with pots and pans, throw rocks, and if needed, hit the bear. Do not let the bear get any food.

If you have surprised a bear and are contacted or attacked and making noise or struggling has not discouraged an attack, play dead. Curl up in a ball with your hands laced behind your neck. The fetal position protects your vital organs. Lie still and be silent. Surprised bears usually stop attacking once you are no longer a threat (i.e. "dead").

If you have been stalked by a bear, a bear is approaching your campsite, or an attack is continuing long after you have ceased struggling, fight back! Predatory bears are often young bears that can be successfully intimidated or chased away. Use a stick, rocks or your hands and feet.

Most people who hike in Alaska's wilderness don't carry a weapon. They know that the best defense is common sense. Traveling and camping carefully are all that they need. If you feel the need for additional protection, consider carrying "pepper spray", a bear deterrent made from the juice of red-hot peppers. This incapacitating spray teaches bears a lesson without permanently maiming them. It's available at local sporting goods stores and at visitor centers. Be familiar with the characteristics of the brand you choose and its warnings.

You are allowed to carry a gun for protection in state parks. Remember, though, that more people are hurt by the guns they carry than are hurt by bears. Select a gun that will stop a bear (12-gauge shotgun or .300 mag rifle) and practice firing it at a rifle range. Any bear shot in self defense must be salvaged and turned over to the Alaska Department of Fish and Game.

Click here for the Alaska Department of Fish and Game's
"The Essentials for Traveling in Bear Country".