The Guide Concession Program (GCP), being developed by the Department of Natural Resources, did not receive funding from the Alaska State Legislature for the fiscal year of 2014. The DNR effort to finalize the program was halted following the 2013 legislative session.

Future updates to the program will be available at this GCP website. Thank you for your participation and interest in the GCP.

Note: The maps below can be viewed in High Resolution [Hi Res] or Low Resolution [Lo Res]. Choose [Lo Res] if you have a slow internet connection.

It was in 1973 that the legislature created the Guide Licensing and Control Board (GLCB).  The intended purpose of this board was to, "protect fish and game management," and, "to get competent people as guides in Alaska." The board was assigned the tasks of establishing guide licensing regulations, defining unlawful acts, providing for the disciplining of guides, and generally regulating guide activity in the state.  In 1974, the GLCB established an area system for limiting guides to operations within Exclusive Guide Areas (EGAs).  At the beginning this system was only applied in a few game management units, but by the end of 1976, the board had extended the program and decided to grant EGAs to qualified guides anywhere in the state.

This system of EGAs was found unconstitutional by the Alaska Supreme Court in 1988, in what is commonly known as the "Owsichek" decision.  The court found the program to be "in contravention of article VIII, section 3 of the Alaska Constitution," which is the common use clause. The decision cited several major reasons in support of the finding, stating the EGAs were:  not subject to competitive bidding, not based primarily on wildlife management concerns and therefore could not be justified as a wildlife management tool like other constitutional restrictions on common use (such as hunting seasons and bag limits), did not provide remuneration to the state, and were grants of unlimited duration and were not subject to any other contractual terms or restrictions.  The court went on to say that Department of Natural Resources (DNR) leases and concession contracts did not share those characteristics.  Indeed the court further stated that, "Nothing in this opinion is intended to suggest that leases and exclusive concessions on state lands are unconstitutional.  The statutes and regulations of the Department of Natural Resources authorize leases and concession contracts of limited duration, subject to competitive bidding procedures and valuable consideration."

Today there are no limits on the number of guides conducting big game guided hunts on state land and there are no limits on the number of DNR, Division of Mining, Land and Water (DMLW) authorizations a guide can have on general state land. There have been a number of issues identified by members of the industry, the Big Game Commercial Services Board (BGCSB), and the Alaska Board of Game (BOG), including: lack of wildlife conservation, loss of quality of experience, conflicts between user groups, a lack of land stewardship and inadequate levels of enforcement.

There has long been some level of interest within segments of the commercial hunting industry to re-create a program similar to the old EGA approach, but one that satisfies the deficiencies pointed out in the Owsichek decision and which works within the constraints of DNR's statutory authority. In 2006, former DNR Commissioner Mike Menge initiated a review of whether the department's authority was in fact sufficient to create such a program.  In directing department staff to accomplish this task, Commissioner Menge recognized that the lack of direct funding would limit DNR's ability to implement such a new program, should it be found viable.
DMLW staff, working with the Department of Law, has found that the department does have sufficient authority to create and manage a program to allocate big game guiding opportunity.  With monetary support from the Legislature, and wildlife management input from the Alaska Department of Fish and Game (ADF&G), DMLW has committed to developing the necessary elements of a new guide concession program.

The first drafts and concepts of what a DNR led program would look like were published and presented to the public in a White Paper and other supporting documents in December of 2009. This scoping effort was intended to get feedback from the public, other agencies, and members of the guide industry. Informational meetings were held in Anchorage, Fairbanks, Juneau, Tok, Dillingham, Kodiak, and Kotzebue. In order to give industry members who live outside of Alaska a chance to contribute, there was also a meeting held in Little Rock, AR, in conjunction with the Western States Land Commissioner Association meeting. The public and agency comment period was open from December 8, 2009 through March 31, 2010. The comments received were considered and responded to by DMLW. These comments resulted in changes to the proposed program and an extensive review and edit of the application scoring process and guide concession maps which were reflected in the February 2012 Proposed Decision.

In February of 2012, consistent with AS 38.05.945, the proposed decision was advertised and distributed for agency and public comment for a 68 day comment period beginning February 15th and ending April 23rd. Notice of the proposed decision was published on the DNR website, in the Anchorage Daily News, The Juneau Empire, and the Fairbanks Daily News-Miner on February 19, 2012. Three public meetings were held in Anchorage, Juneau and Fairbanks as well as four web based meetings during the comment period. Notice was sent to all guide license holders, any persons who had previously commented on the program, landowners, agencies, and other interested parties. During the comment period, 192 comments were received.

In June 2012, DNR formed an Interagency Steering Committee with representatives from Alaska Department of Fish and Game (ADF&G), Division of Parks and Outdoor Recreation (DPOR), and Bureau of Land Management (BLM). The purpose of the committee is to cooperatively design and develop the framework of the GCP. DNR hosted multiple meetings with the cooperating agencies to decide on key issues brought forward by public comments and other agencies.

In response to public comments asking for increased industry participation, the Interagency Steering Committee also held information sharing meetings with the Chairs of the BGCSB and BOG. The purpose of these meetings was to receive additional feedback from the two regulatory boards that impact the guiding industry on possible changes to the GCP.

In addition to their participation on the Interagency Steering Committee, BLM is a potential landowner partner in the GCP. If BLM commits to the GCP, contracting guides who wish to operate on their lands will have to be the DNR concession permittee for that area. It is expected that the permits, stipulations, and fees that BLM currently requires of operators will remain, though the system of fee collection and administration may be streamlined amongst the agencies. 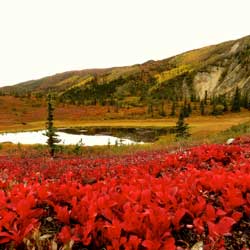 As a first step in potentially joining DNR as a partner in the GCP, BLM has begun their own process to address commercial hunting guide capacities for BLM lands in Alaska. BLM conducted a 60 day public notice and scoping period to investigate commercial hunting guide Special Recreation Permit capacities for BLM lands in Alaska. The scoping period began on July 9, 2012 and ended on September 9, 2012.

The mission of the GCP program is to encourage land stewardship, support wildlife conservation, and to promote a healthy guiding industry to benefit the people of Alaska.  The GCP will select qualified individuals to conduct big game commercial guiding on general state land and those state lands managed by DNR/DPOR where commercial guiding is allowed.  The program's allocation process would involve qualified individuals submitting an application with supporting documentation to the department, which would then be reviewed and scored by a panel of agency personnel.  There may be more than one panel, representing different regions of an agency's jurisdiction.  Panel participants may be employees of: DNR, ADF&G, Department of Commerce Community and Economic Development (DCCED), Department of Law (DOL), Department of Public Safety (DPS), and the BLM.  Concessions would be awarded and managed by DMLW.  A concession would grant access to the land within a guide concession area and permit commercial big game guiding.  This program does not address any other commercial or private entities or any other non-participating landowners.

The department is currently working with the BLM on the potential of implementing the GCP on their lands.  As a first step in potentially joining DNR as a partner in the GCP, BLM has begun their own process to address commercial hunting guide capacities for BLM lands in Alaska. BLM conducted a 60 day public notice and scoping period to investigate commercial hunting guide Special Recreation Permit capacities for BLM lands in Alaska. The scoping period began on July 9, 2012 and ended on September 9, 2012. If the GCP is implemented on these lands, it may be that only the concession permittees will be able to operate on BLM and DPOR lands.

Public comments are an essential part of the program development process. As a result of public comments, however, there often are several hundred letters, calls, and comments to review. Here are some suggestions of how to make your comments stand out and get full consideration.

For questions and comments regarding this program, and to submit comments via email, fax, or mail, contact: