Alaska's award-winning Kids Don't Float Program has become a model for educators and injury prevention specialists throughout the U.S. For more information about how to start a program in your area or to request a presentation contact our office.

Kids Don't Float began in Homer, Alaska, in early 1996. The Homer Fire Department, with a grant from the Alaska Department of Health and Social Services, collaborated with Homer Safe Kids, the U.S. Coast Guard Auxiliary, and the Homer School District to establish 15 life jacket loaner stations in communities around Kachemak Bay. The stations, or "loaner boards," display life jackets that can be borrowed at no cost and returned after use. The public response was so positive that, in November of the same year, the Alaska Department of Health and Social Services Section of Community Health and EMS, the U.S. Coast Guard District 17 Recreational Boating Safety Program, and Alaska Safe Kids partnered on an expansion. In 2000, the newly established State Office of Boating Safety joined the partnership.

Donate life jackets to Kids Don't Float at any of our designated donation centers. 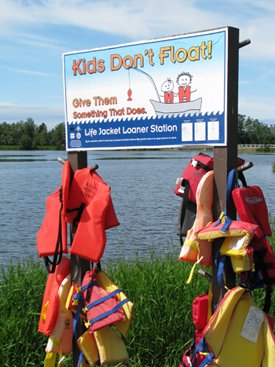